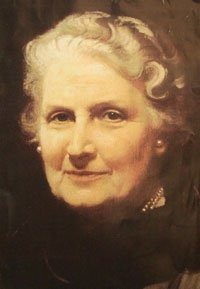 An idea fundamental to Montessori philosophy is that the child has an innate desire to develop her/his human potential in all its dimensions. Equally intrinsic to Montessori philosophy is the belief that the young child has an “absorbent” mind. Maria Montessori believed that just as a baby learns to walk and talk spontaneously and without the direction of an adult, so is the child able to absorb and process all sorts of information from her environment, and in effect, to teach herself. Thus, Maria Montessori believed that the primary job of childhood is for the child to “create” her/himself.

Maria Montessori was the first woman accepted by the University of Rome Medical School and was graduated with honor in 1896. She did a great deal of her early work in children’s wards of the local hospitals and went on to work with mentally-ill children under the supervision of Itard and Seguin, innovative scientists of the time. Using their methods and didactic materials, she worked extensively on the education of these children. At the end of her work with them, many of them passed the state tests on a level with typical children. Montessori then concluded that there was something wrong with the regular education program and devoted the remainder of her life to studying and improving it. Many of her recommendations such as movable tables and chairs, the need for special nutrition, and time outdoors came from her background as a physician.

In 1903, Montessori was asked to start a special program which she named “Casa de Bambini” or “Classroom” for the children of working parents in a new public housing area in the San Lorenzo district of Rome. The developers hoped that with organized activities, the children would not mark the walls and be otherwise destructive to the new buildings. By observing these children and their teachers (whom she called Directress) Montessori further developed her philosophy of education.

Through these undertakings, Montessori became aware of the value of a prepared environment, which meets the child’s needs, and of a child’s need for joy in learning. This philosophical framework leads to the Montessori environment: an environment that is carefully planned to include materials that meet the cognitive and developmental needs of the child, and which enable the child to learn through her personal interactions with the environment. Because the child has been prepared for each new material, she is able to proceed at her own rate. The self-correcting characteristics of each exercise, combined with the fact that the child has been prepared for each new step, leads to successful experiences which lead to further successful experiences.

Dr. Montessori wanted this environment to be open-ended, not a fixed system. She believed the classroom should be innovative, full of constant experimentation based upon observation of the child. It is a nourishing place; a place of self-construction which reveals personality and growth patterns. Not only must it contain all it needs, but all obstacles must be removed as well.

Although Maria Montessori placed such emphasis on the environment, it is important to keep in mind several key ideas:

She regarded the environment secondary to life itself. In the Montessori Method she states: “It can modify, it can help or hinder, but it cannot create. The origins of species and individuals lie within. The child doesn’t grow because the environment is nourishing. She grows because the potential life within her grows, making itself visible.”

The environment is carefully prepared for the child by a knowledgeable and sensitive adult.

The adult is a participant in the child’s life, living and growing within it. The eventual outcome of the class depends upon the teacher’s ability to participate with the children in a life of becoming.

The Montessori Classroom environment has four major areas. The activities in the Practical Life area aid in the development of the child’s sense of order, self-reliance, and muscular development. Each material in the Sensorial area provides a means for the child to focus on a particular sensory perception, thereby enhancing the child’s ability to perceive similarities and differences, to grade and match, etc. The purpose of the materials in the Math area aid in development of the mathematical mind. Beginning with the concrete, the materials gradually enable the child to comprehend abstract mathematical concepts. The materials in the Language area lay the groundwork for reading and writing. There are also many activities in the areas of Art, Music, and the social and natural Sciences, which enrich the child’s development, as well as her understanding of the world around her.

Our environment is prepared so that individualized learning establishes an intimate contact between the child, teacher, and work. Everyone knows everyone; it is like a family. Work is shared and learning is vitalized by social life. Adding to the community spirit is parent involvement. Because of the open-ended Montessori environment, there is no limit to what the child can do. In collaboration with the teacher, all kinds and levels of learning take place, thereby maximizing the individual potential of each child.

See why Montessori Schools are the best option for your kids, and you!

Copyright 2019 | All Rights Reserved | Powered by